•••••
For a number of months, I have been toying with a poem based on a theme of chaos. By accident I had stumbled on a web site celebrating the notions of Eris/Discordia and the subsequent religion/philosophy of Discordiansm. The connecting chain of links, now, I have lost— as well as the original purpose in mind when I was researching for a lecture. (— a pop song lyric’s reference to Eris? — a Paul Celan or Marvin Bell poetic allusion?) Nonetheless, the following lines show the experimental fractured form, the first ten entries from the original, raw, chronological sequence:

•
Chaos as a Girl, just over Seventeen

1. There is a structure to chaos

2. the manner the universe unravels, spirals at a quickening velocity, loosening the knot of its becoming

3. the girl chanting in her head: undo this knot I did not knot

4. the taste of salt dissolving on the tongue— as language

6. the motion of a pen scripting the word salt

8. the throat of the river blocked from becoming rapids

9. without language, the failure of words,

10. the turn of a phrase along the bottom hem of her skirt, then the scene changes—

Intentionally, a blurring of three or four possible short poems were brought together as one larger unit. A collage of plausibility. One clear influence is a work by Kimiko Hahn: “Wellfeet, Midsummer” which consist of small chunks of numbered poetic statements, which at first appear in logical sequence, but then begin to slightly scramble numerical order or drop out, delete specific passages.

With the latest chaos poem, I printed out the individual entries, then proceeded to paste them in random order, blindly selecting the scraps of paper from an envelope. Ironically, due to the persistent theme and consecutive imagery in the lines, the impulsive structure intuitively shaped itself. Back in September I used a slightly similar approach with a poem titled “Saint Brendan and the Whale, yet in that case, I paid close attention to the resulting “quilting” of stanzas. For the “Chaos” lines, the juggling process occurred strictly by subconscious instinct. 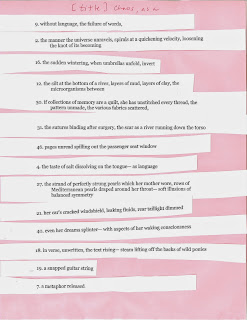 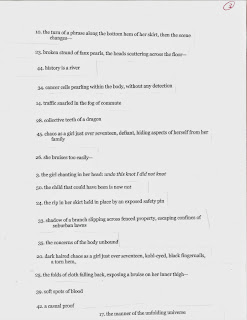 •••••
Ultimately there will be a few more shifting around of individual presentation of some lines, some deleted numbers. However, the core of the work will remain intact, focusing on personifying the Greek Eris into a modern, personal moment.


•
Reality check. Coincidence? Further Irony? The National Public radio in Houston just played this song as I am typing out the blog post. The video-clip displays a vocal representation of what I am putting into the verse. A "random" selection of voices pieced together into a virtual chorus.

From apparent, random disorder to collective, structured order.
No rules equates to rules. 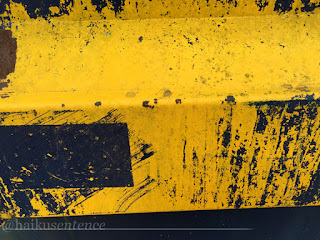